7/3
Got our cars at 0530 and headed straight towards Ashdod where we were going to meet up with Yoav Perlman for some gulling. Common Myna and Ring-necked Parakeet were both easy on the drive from Tel Aviv to Ashdod. Ashdod is situated right at the Mediterranean Sea and offers very close views of different gull species/subspecies that are very rare in north-western Europe (cachinans, barabensis, heuglini, fuscus and armenicus). We definitely got our gulls on! At the coast we saw the only Pallas Gull of the trip, an adult in summer plumage at sea off Ashdod. Other birds of interest included 2K Pallid Harrier, Rüppels Warbler and Syrian Woodpeckers. Mountain Gazelle and several Harduns were other gems.
From Ashdod we vent to Hulda Reservoir were White-headed Ducks are numerous during the winter. The Reservoir is fairly small and packed with ducks. Other birds of interest included 2 males of Ferruginous Duck and some passage of White Storks. A European Chameleon was a first for everybody except Yoav!
We left Hulda and headed towards Lahar Reserve making a short stop at a local Falaffel Bar recommended by Yoav (it was great). The place was also good for the local race of Jay.
Lahar Reserve is breeding site for Long-billed Pipit and an overwintering site for Finsch’s Wheatear. The pipits are quite easily found on the slopes of the hills – we had 3-4 singing individuals. A male and a female Finch’s Wheatear were seen along the rocky road to the hills. Remember to keep your car in sight during a visit to this area. Yoav told us that cars often get robbed her, so look out for the local shepherd. It is fairly easy to tick of the pipit and have the car in sight though. At Lahar Reserve we also saw our first Golden Jackals (4) of the trip.
It was now late afternoon and we had to get going if we were to see any Nightjars at Neot Hakikar. A small detour to a cliff near the Goral Junction with breeding Lesser Kestrel was successful.
At Neot Hakikar Yoav gave a short introduction to the miserable situation of the Nubian Nightjar which is one of the rarest breeding birds in Israel. Spotlighting along the roads and over the fields gave good views of 4 Nubian Nightjars including two seen on ground. Unfortunately they did not stay long enough for us to take any photographs.
We spend the night at the Cycle Inn in the local kibbutz. A short spotlighting walk within the kibbutz produced nothing of interest though everyone agreed that it had been a perfect day to the begin our tour of Israel.
Text RDN and photos SSL
Indsendt af SSL Ingen kommentarer:

After the initial four day tour of the central part of Kenya one day was reserved for relaxing in Nairobi. After that a short flight took us to Malindi on the coast. From here we went to Watamu, a tourist area about 30 km south of Malindi. Watamu is very good if you want to combine birding with family time. Mida Creek is nearby and is home to good numbers of shorebirds with Crab Plovers being the star attraction and Arabuko-Sokoke forest is only a 10 minutes drive away (several endemics possible here).
We stayed at the A Rocha field centre, about two kilometres south of Watamu. We discovered later on that it was religous foundation doing biological research in the area. The people there were really nice and it was not a problem that we were not exactly religous. They have several small huts that one can rent quite cheap. There is bird ringing in the garden and only a two minute walk down to the beach! Birds were numerous with Eastern Bearded Scrub-Robin, Eastern Nicator, Purple-breasted Sunbird and Northern Carmine Bee-eater all seen in the garden (got 10 new species on the first day). The first night I heard a strange call which I at first presumed to be an owl. I put on my head lamb and went for the sound. It turned out to be a Lesser Galago, very nice.
The next day I got invited to do a night session ringing shorebirds at Mida Creek on the night before our departure!  I gladly accepted. Ringing of shore birds at Mida Creek is best when high tide is during the night when birds fly in to roost without being able to see the nets put out on the mudflats.
We drove down to Mida Creek in the afternoon seeing Wahlbergs Eagle and Böhm's Spinetail on the way. An initial look out over the mudflats at Mida revealed a lot waders including several Crab Plovers. We had to deploy the nets quickly (see video) as the tide was coming in. It turned out to be really good ringing session! We caught Crab Plover (20), Lesser Sandplover (20+), Greater Sandplover (20+), Grey Plover (10+), Terek Sandpiper (20+), Little Stint (25+), Curlew Sandpiper (20+), Whimbrel (5+) and Saunders Tern 1. I got ten new ringing species!! Unfortunately I could not bring my camera (big one) as theft done by local fishermen had been causing problems.  The session lasted from 1630-0530. We had to leave at 0730 to catch the bus from Malindi-Lamu the following day so I did not get a lot of sleep...

24/3
Early morning the compound and Lake Naivasha produced Black Heron, Pink-backed Pelican, Fischer’s Lovebird, Long-toed Lapwing, Horus Swift and Nuanza Swift. Left Lake Naivasha and headed south towards Kinangop Grasslands. Kinangop Grassland is the easiest place to see the endemic Sharpe’s Longclaw. The birds breed on grazed grasslands in the highland. We quickly found one Longclaw and ended up seeing at least three different birds one of them offering extremely good views after 20 metres of crawling in the grass and some good pushing by Joseph. Other good birds at the site included a group of 15 migrating Lesser Kestrels, Capped Wheatear and Levaillant’s Cisticola. In the afternoon we birded the southern most part of the forest in the Aberdares. We arrived at the site at 1200 after some challenging driving. Highlights included Mountain Buzzard, Hartlaub’s Turaco (a total of seven birds heard but unfortunately none seen), Bar-tailed Trogon (male seen good though always posing with the back towards us), Silvery-cheeked Hornbill, Mountain Greenbul, White-starred Robin, Brown Woodland Warbler, Hunter’s Cisticola (one bird singing at a nearby stream), Grey Apalis (only heard), Chestnut-throated Apalis (common, with two birds seen and another 8 birds heard), Eastern Double-collared Sunbird and Olive Sunbird. Mammals included an unidentified Duiker, Colobus and Sykes Monkey. A visit to the forest in the early morning would definitely have proved more fruitful, next time… Arrived back in Nairobi at 1630 after four days of high speed birding/mammaling

23/3
Picked up at the hotel at 0700 for a short drive to Lake Nakuro National Park. Rüppell’s Long-tailed Blue Starling was picked up by the entrance to the park where the local Vervet Monkeys were trying to break into our van. Lake Nakuro National Park consists of a big lake with forest all around and an area with savannah in the southern part. Birds were everywhere and birders could certainly use more than one day here. The amazing numbers of Great White Pelicans and Lesser/Greater Flamingoes makes this national park a must for any birder visiting Kenya. The spectacle is simply amazing. Birding highlights included Hildebrandt’s Francolin, Coqui Francolin, Bateleur, Broad-billed Roller, Yellow-throated Longclaw, Grey-Crested Helmet Shrike, Little Rock Thrush, African Thrush and displaying Wing-snapping Cisticola. Mammals included White Rhino, Lion (one male and three females relaxing in an open part of the forest), Rothschild’s Giraffe and Guereza Colobus. After lunch we headed for Naivasha adding another Secretary Bird on the way. A short stop searching for Schalow’s Wheatear proved fruitless but we did find a Slender Mongoose which was the only mongoose of the trip. To be certain of getting the wheatear one should add a half day in the nearby Hell’s Gate National Park where other high lights could include Verraux’s Eagle. Unfortunately I did not have the time to do this. Stayed at Naivasha Lake Resort and one hour birding the private compound in the evening produced Goliath Heron, Hottentot Teal, Buff-bellied Warbler, Yellow-breasted Apalis, Diederik Cuckoo and Winding Cisticola. Hippos are easily seen from the private shore line and they feed on the grassy area on the shore at night. The hotel has an electrical fence around it to stop Hippoes from entering and smashing the area!
Indsendt af RDN Ingen kommentarer: 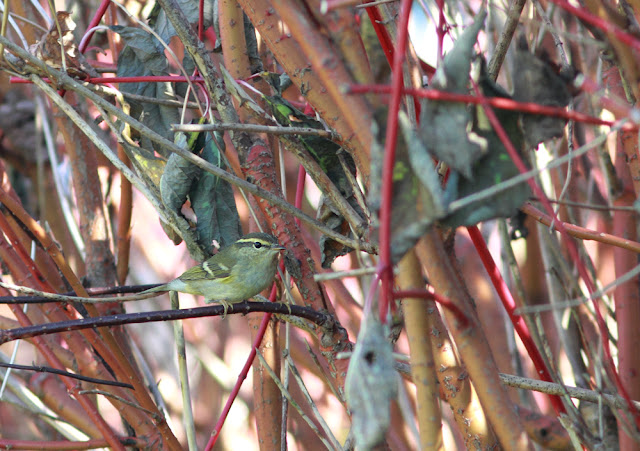