Early on the 15th we started the real expedition and headed east towards Karakol where we were going to get two new cars plus drivers. Before entering the Tien Shan Mountains we would have to cross a mountain pass (3800 meters). Five kilometres from the top we met four Kyrgyz guys coming down the mountain. They waved at us and told us to stop. Apparently their truck had got stuck in the snow further uphill, not exactly good news. We tried to continue but soon realized that their truck was in fact hindering our continued quest into snow leopard land. After some discussions we agreed on going back down the mountain for the night and then get the local snow “cleaners” into action the following day. The following day we headed for the pass once more adding Güldenstats Redstart to the bird list on our way. Near the top the truck was still in the way with a four meter high snow cover. We started to doubt the whole snow cleaning process a bit but at least the local guys were already there. Three of the locals had gone for the pass to try and repair a snow cleaning vehicle placed there. A three hour walk up the mountain only produced a Lammergeier, impressive bird though. In the end the road was actually cleared of snow and we crossed the pass just as the sun was setting. We still had to cover another 3-4 hours of gruesome driving before reaching our final goal. 20 kilometres before our final goal we stopped at a local shepherds hut for the night. Here we were served soup before retiring to our sleeping bags. 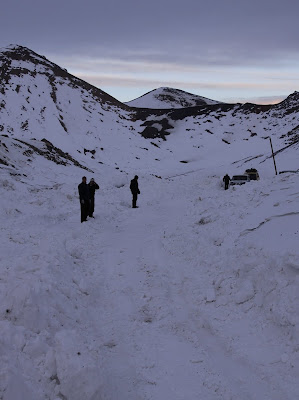 16/12 Finally made it through the pass 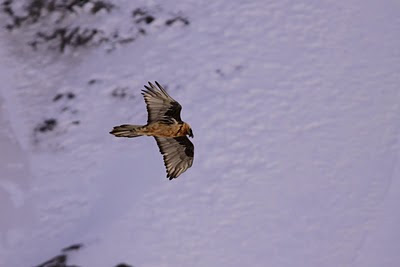 Snow Leopard has for a long time been in the top on my most wanted mammal list. Towards the end of 2010 I had gathered a large amount of over time at work and I decided to use it on a mammal/bird watching trip. None of my usual local travel companions were able to participate due to late notice and lack of holiday so I was on my own. I contacted Michael Westerbjerg (www.miksture.com) in Kygyzstan about the possibility of snow leopard trip. He already had a scheduled trip but this was cancelled due to lack of participants. An expedition to new areas deep within the Tien Shan Mountains was a possibility though. Using his network of shepards and locals we ended up having to choose from two areas. The first one situated in the southern Tien Shan Mountains close to the Chinese Border and another area in easternmost region of Tien Shan Mountains. An expedition to the first area in December 2009 revealed tracks from 6-10 different Snow Leopards. In the second area a local shepherd had seen Leopards regularly for two years. In the end we decided to try the second area.

I left Copenhagen together with Eva (Swedish psychologist) on the 12th of December and headed for Bishkek where we were to be picked up by Michael and his partner, Mischa. Arrived in Bishkek early in the morning on the 13th a bit late. From the airport we drove east until first light where we had a small break at a roadside stop. Here I got my first new bird, Pine Bunting. An hour’s drive more and we stopped to eat breakfast. Himalaya Griffons, Golden Eagle and Black-throated Thrush were all seen from the cafeteria. At the cafeteria we had our first tasting of the traditional Kyrgyz Soup but not the last. From the cafeteria we headed further east and soon we could see the amazing Issuk Kyl Lake (2nd largest mountain lake in the world). Driving along the southern shore of the lake we saw more birds; White-tailed Eagles, Red-crested Pochards (1000+), Black-necked Grebes (1000+) amongst others. We arrived at Tamga at 1400. This small village was going to be our home for the next couple of days, this to get fully acclimatized to the height and to get some well earned sleep. After settling in at small guest house we went out for a walk. A lot of good birds were seen e.g. Long-tailed Rosefinch, Red-mantled Rosefinch, Wallcreeper, White-Browed Tit Warbler, White-bellied Dipper, Azure Tits, Fire-fronted Serins and many others. The next day we explored the vicinity of the village once more adding Meadow Bunting and Red Squirrel to the list. The squirrels are easily seen near the Sanatorium, they differ a lot from the normal red ones we see in Europe. 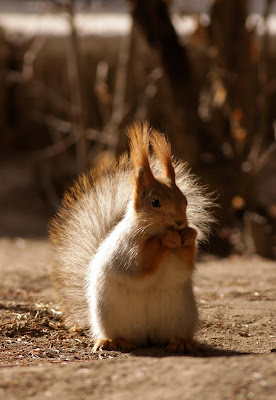 14/12 Tamga. The squirrels are quite different from the ones we see in Europe. 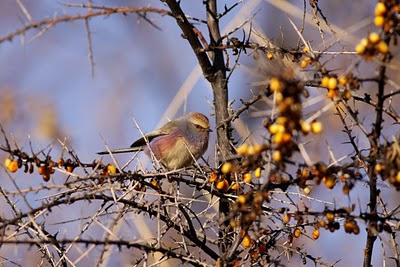 13/12 Tamga. 5-10 Tit-warblers were feeding in scrubs near Issuk Kul. They were often really close but almost never visible feeding in the grass or within dense bushes. 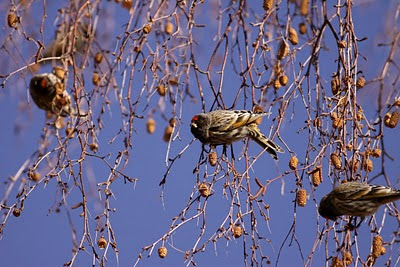 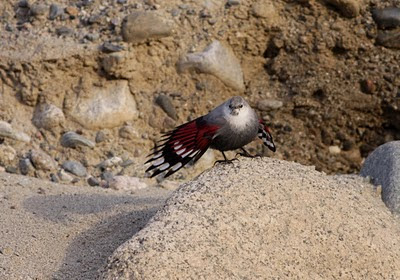 14/12 Tamga. This Wallcreeper was seen feeding on small cliff on two consecutive days. 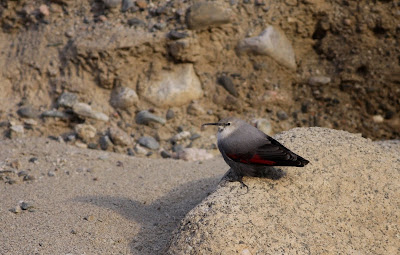 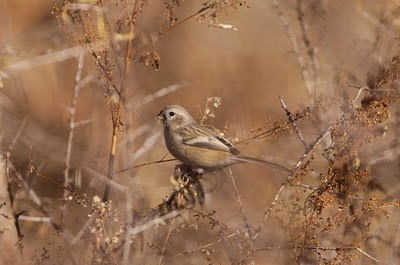